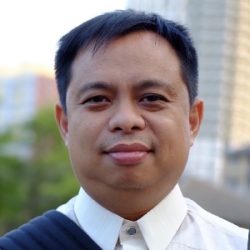 University of the Philippines, Bachelor of Arts in Communications Research (2002)

University of the Philippines, Juris Doctor (2008)

Professor Bañez is an Assistant Professor at the University of the Philippines College of Law, teaching Legal Bibliography, Legal Method, and Legal Profession.

He taught in the UP College of Mass Communication, Communication Research Department from 2005 to 2013, and was the Technical Chief of Staff of the Institute for Government and Law Reform from 2011 to 2013. He also served as Associate Solicitor, and later, State Solicitor in the Office of the Solicitor General from 2013-2017. In addition to teaching at the UP College of Law and heading the Information and Publications Division (IPD), he also serves as Special Counsel of the Disini & Disini Law Office and teaches at the University of the Philippines Open University.

Co-Author, Evolving democracy: A memetic analysis of the latest proposal for constitutional change in the Philippines, In POLITICAL MARKETING: STRATEGIC ‘CAMPAIGN CULTURE’CULTURAL ISSUES AND CURRENT TRENDS (2013)