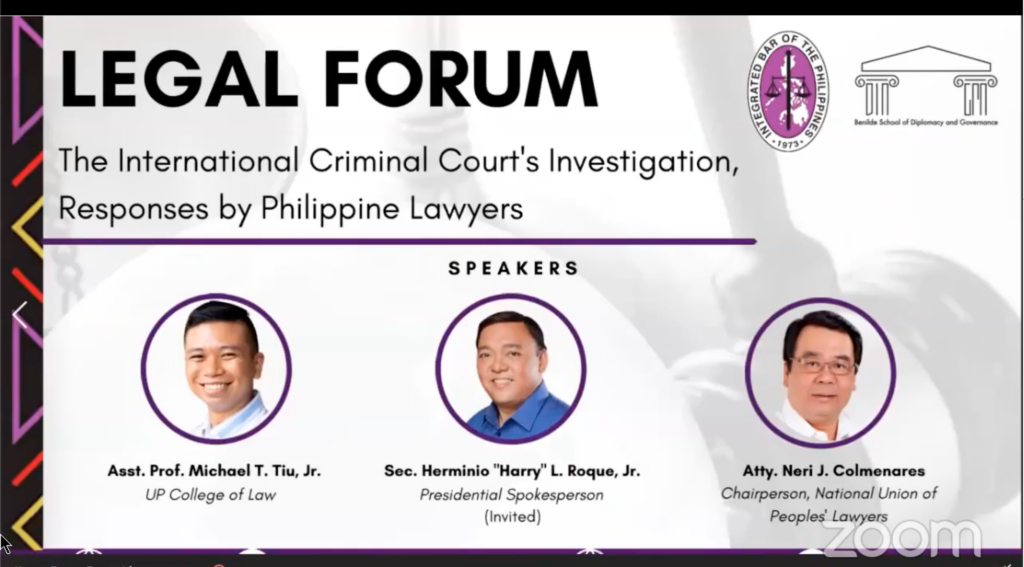 On 06 October 2021, Asst. Prof. Michael T. Tiu, Jr. – Head of the International Criminal Law Program of the UP Institute of International Legal Studies (UP IILS), took part in a webinar entitled Legal Forum: The International Criminal Court’s Investigation, Responses by Philippine Lawyers organized by the Integrated Bar of the Philippines International Law Committee (IBP ILC). The webinar was moderated by Asst. Prof. Andre C. Palacios who is Chairperson of the IBP International Law Committee, and Mr. John Paul Mondejar of the Benilde School of Diplomacy and Governance. The forum also featured Atty. Neri Colmenares, the Chairman of the National Union of People’s Lawyer (NUPL). Secretary Herminio “Harry” L. Roque Jr. was invited, but he was unable to join the forum. 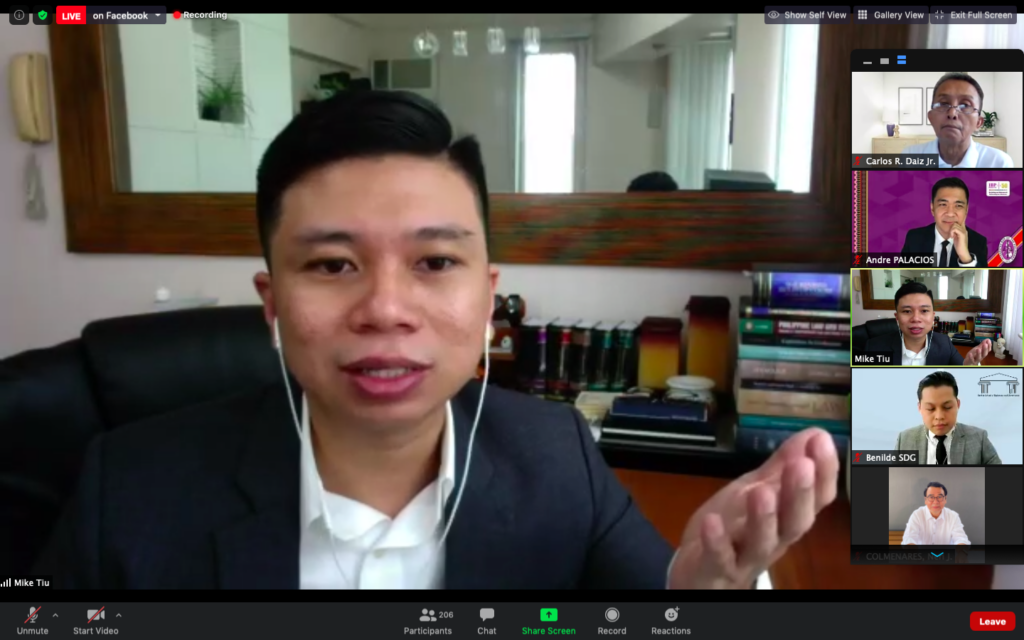 During his Opening Statement, Prof. Tiu provided an overview of the investigation being conducted by the Prosecutor of International Criminal Court (ICC) into the Philippine situation, with a focus on the alleged crimes against humanity committed under the ‘War on Drugs’. He emphasized the differences between the general nature of preliminary examinations and the ongoing investigation wherein the Pre-Trial Chamber (PTC) of the ICC authorized the Prosecutor to look into the killings in the Philippines from 2016 to 2019. On this point, Prof. Tiu added that an investigation like this is not entirely foreign to the Philippine legal community and should be welcomed if the objective is to establish facts and ensure that there is no impunity in this jurisdiction.

Prof. Tiu also outlined the discussion in the authorization issued by PTC with respect to the conclusion that there was a “reasonable basis” to find that the crime against humanity of murder appears to have been committed. In particular, the PTC found that the preliminary materials presented by the Prosecutor reasonably demonstrated the existence of the elements of the crime, i.e. that one or more persons were killed, in the context of a widespread or systematic attack against a civilian population.

The PTC found that data from the Philippine Government itself, as well as from non-government organizations clearly show that killings did occur in the course of the war on drugs. The existence of an attack against a civilian population was established by records of statements by the President, other government officials, and police insiders to the effect that those involved in the illegal drug trade are targets in police operations. Furthermore, the widespread character of the attack was deemed established by the fact that the recorded killings happened in various regions in the Philippines.

He then answered, affirmatively, the question on whether the victims and their families should seek justice through the ICC, and explained that while their first resort would ideally be to the domestic criminal justice system, they should seek justice wherever they can find it. Finally, Prof. Tiu emphasized that lawyers, as agents of law and justice, should cooperate with the ICC investigation; that Philippine lawyers are duty bound to defend all laws, including international law. 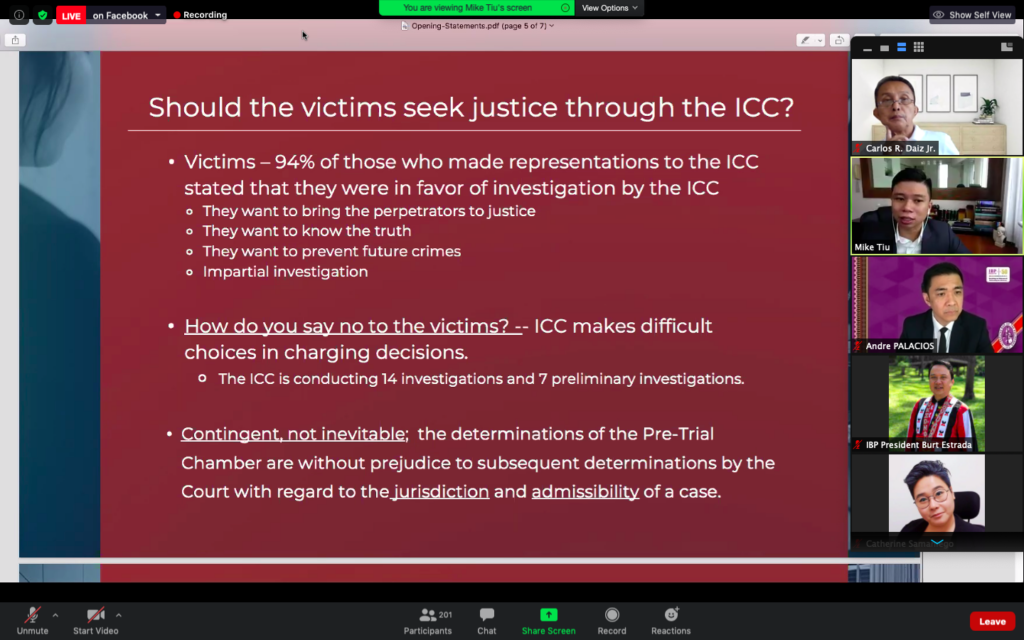 Atty. Colmenares, counsel for a number of the victims of the alleged killings and their families, who filed a Communication with the ICC Prosecutor, recounted the string of domestic events intrinsically related to the War on Drugs that predicated their filing of a communication before the ICC. Despite the withdrawal of the Philippines from the Rome Statute, Atty. Colmenares asserted that the statute’s residual binding effect under Article 127 suffices to sustain the present investigations. Further, he assessed that all the elements of the crime against humanity of murder are present considering that the statements of the President and of the families of the victims taken together with the character of the alleged crimes committed clearly linked the killings to a systematic policy carried out against those involved in the illegal drug trade.

A number of illuminating points were also made during the open forum.

One of the first questions asked why the ICC only acted in 2021 when the first communications were filed 4 years earlier, in 2017. Atty. Colmenares stated that the delay was due to the ICC’s due process requirements. In the same vein, Prof. Tiu emphasized that the ICC goes to great lengths to safeguard the rights of the accused in all its proceedings.

In response to a question regarding the existence of a written government policy behind the killings, Prof. Tiu answered that such a written policy was not required, although it is obviously explicit in this case. Prof. Tiu reiterated that the statements of the President and other state agents confirmed the existence of a policy, as well as the link between the increase in extra-judicial killings and the operations under the ‘War on Drugs.’ Atty Colmenares also emphasized that a pattern was indeed clear from the evidence and the witness testimony.

A recording of the live webinar is available at the IBP’s official Facebook page. Prof. Tiu’s participation in the IBP ILC forum works towards the enrichment of the understanding and discourse of International Criminal Law in the Philippines. This serves the mandate of the UP IILS in deepening expertise in areas or issues of international law and international relations.