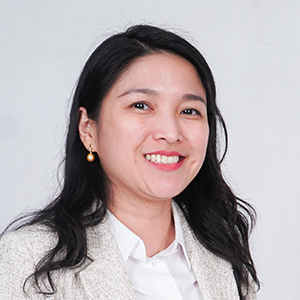 University of the Philippines Diliman, Bachelor of Arts in Public Administration (2000)

University of the Philippines College of Law, Bachelor of Laws, (2005)

She obtained her Bachelor of Arts degree in Public Administration in 2000 and her Bachelor of Laws degree in 2005 from the University of the Philippines in Diliman. She took the Bar Exams later that year and was admitted to the Bar in 2006. She worked as an associate at the Roco Kapunan Migallos and Luna Law Offices and subsequently at Kapunan Lotilla Flores Garcia and Castillo prior to her three-year stint at the Tan Venturanza Valdez Law Offices, where she focused on corporation, banking and securities law. As an associate at TVV, she handled special projects such as listing of corporations with the Philippine Stock Exchange and mergers and acquisitions. She was also appointed as Corporate Secretary or Assistant Corporate Secretary of private and publicly-listed clients of the firm.

In 2010, she started working at the University as REPS at the Institute of Government and Law Reform of the UP Law Center, where she worked as Project Head for research projects of the Institute. As such, she headed research projects of the Institute such as the FOI Manual Task Force, the output of which is the FOI Manual of the University of the Philippines approved by the Board of Regents on 01 August 2018 at its 1336th Meeting; the University Code Revision, the codified Book One of which was submitted to the Office of the President of the University in November 2017; Code of Crimes Revision, the partial output of which is Book One of the Code of Crimes which was submitted to the House of Representatives Committee on Justice and which was filed as House Bill No. 6204; FDA Codification Project; Labor Code Revision; and Assessment of the Implementation of RA 9344 (Juvenile Justice and Welfare Act), the output of which is the written report An Assessment of the Implementation of Republic Act No. 9344 or the Juvenile Justice and Welfare Act by Local Government Units in Luzon, published in Philippine Law and Society Review Volume 2, Number 1 (2013). She was also a co-author of the Handbook on Philippine Competition Act: An Introduction to Republic Act No. 10667 with Nicholas Felix L. Ty, Edgardo Carlo L. Vistan II, Krystal Lyn T. Uy-Sia and Darwin P. Angeles, which is the output of another IGLR project.

An Assessment of the Implementation of Republic Act No. 9344 or the Juvenile Justice and Welfare Act by Local Government Units in Luzon, published in Philippine Law and Society Review Volume 2, Number 1 (2013) as the written report for the Assessment of the Implementation of RA 9344 (Juvenile Justice and Welfare Act) Project of the Institute undertaken with the Department of Social Welfare and Development