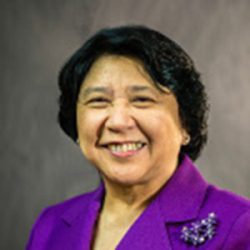 University of the Philippines, BAF (1978)

She has been teaching Civil Procedure and Evidence in the College of Law since 1994. She is also a Lecturer for the UP Law Center Institute on Government and Law Reform from 2001 until present. She held the post of UP Office of the Legal Aid Director from 2000 to 2001. She served as Commissioner of the Presidential Commission on Good Government from June 2001 to June 2004. She headed the UP Law Center Information and Publication Division from August 2004 to 2009.

Editor, 1997 RULES OF CIVIL PROCEDURE AS AMENDED: RULES 1-71: WITH RELATED LAWS AND SUPREME COURT ISSUANCES WITH CROSS REFERENCES AND FOOTNOTES (2006).